Yes you read that right.

If you are a Facebook friend of mine, and if you are not then jump over there now and join me, I’m very interactive and friendly https://www.facebook.com/kavijezziehockaday
you will know all about my recent experience with the onset of a very troubling full body rash that appeared almost ‘out of nowhere and left me reeling in shock and the most profound itching I have ever known.

I am happy (fingers crossed and prayers given) to report that finally it is yielding to everything I have thrown at it and I pray it is really beginning to recede, die down, and disappear. But it has left me confused, even bewildered and still without any real answers as to why it happened.

So here I am going to talk about it a bit, and blog about the need to know what is causing our issues, and how important it is to be able to connect cause with ailment, so we have a mental and emotional relationship with it, which means we might be able to have some influence and effect on it in the future, and particularly prevent it from happening again. If it was connected to lifestyle choices I want to know.

I am all about finding root causes. If I know why something is happening it gives me great insight and I can connect the dots. Mystery is so much more difficult to deal with. But the body, mind, emotional system is highly complex and there are so many influences when it comes to symptoms and illness that it can be almost impossible to discover a root cause.

That requires a different level of understanding and acceptance.

So this is some of the story:
I believe it traces back to last year, though I can’t prove it or know it conclusively.
Last year I began suffering from swollen calves, intermittently. I also started to get weaker and more tired. I think there was brain fog. And I had periods when I just didn’t feel myself. In January last year I had my mercury amalgams removed, and because I already had a weak immune system and slightly low thyroid function, it is entirely possible this whole thing undermined my entire physical being and laid the ground for subsequent events.
I went to see a kinesiologist because of my health issues and he confirmed that my detoxification pathways were sluggish and blocked, I did have mercury in my system and my lymphatic system was very poor.
To my regret I didn’t follow through with him at that time.

Cut to this year in Costa Rica. I was under a lot of stress and not handling it well. Life was very insecure and ungrounded and I was pushing my energy with too much coffee and adrenaline, getting myself caught in a bit of a vicious cycle. i do remember thinking, ‘this isn’t working,’ but I didn’t respond as I didn’t know what to do. I was eating great, a Paleo and raw food diet, doing some fasting and exercising, despite feeling tired. I wasn’t right but i kept going.

And then I got a small spot on my lower leg, maybe just a spot, maybe an insect bit, but just a tiny thing. And it wouldn’t heal. It stayed there for the next two months without doing anything. I have experienced slow and bad wound healing before, and had infections that have not healed, so i know the territory. And remember I said my immune system was under par? Well that would contribute to poor wound healing. As would poor circulation, which is thyroid related.

So we returned to England and still the spot, mark thing was still there, and eventually I went to see the doctor. Now i have no faith in doctors but I didn’t want to treatment but testing. Truth is my Ayurvedic practitioner told me to get it checked out as it was bigger by then and looked slightly worrying, like a cancer or something.

So thats when this phase really started.

Blood tests, and skin tests. Nothing revealed itself. No inflammation, no kidney problems, thyroid normal, nothing that would indicate why calves have been swollen or the spot on leg.

The doctor suggested I use some antibiotic cream because there was some infection. I accepted, reluctantly.

I used this stuff for the ext 7-10 days, not really seeing any change.
(Since that time I have read the ‘side effects of this fucidin cream…

And then I stopped. After approximately 7 days I started seeing spots on my arms, then on my legs, then on my shoulders, and then on my torso. It happened quickly and very intensely. Pretty soon I had spots everywhere, getting very itchy. I had no fever and didn’t feel ill. Scared yes, but ill no.

What the heck was this? I have never had one allergy in my life. I have had rosacea eczema on my face twenty years ago. there was nothing to account for this.

I returned to the doctor and got zero answers. He referred me to dermatologist. They always do that, when they don’t know, which is usually, they refer you on, an endless merry go round of ‘specialist’ who have no clue about holistic health.

So the doctor gave me some more antibiotic cream and I went away for two week with my wife so she could write and I could try and heal this thing. I had seen my Ayurvedic practitioner and he diagnosed that I was reacting very badly to near collapse of the system because of stress overload and other factors. he gave me lots of herbs.

Those two weeks I got worse and worse, but never got ill. No fever, and no infection.

I focused as much as possible on health, not the problem. I did yoga every day, I juiced daily, ate a simple anti inflammatory diet, got fresh air, meditated, talked lovingly to my body and researched what on earth was going on.

Then it got so red and ‘angry’ that I went to the hospital. The emergency doctor gave me antihistamine tablets to take down the reaction, but had no idea why it had come. Still no cause.

I peeled. My whole body peeled layers of skin off.

I was very scared, and very very itchy to the point of insanity.

The peak point was going to Watford A and E when I thought I was getting seriously ill. We waited 5 hours to see a doctor who took all my vitals and announced it looked ‘like dermatitis.’ That was it..I mean, I knew it was feckin dermatitis,That just means inflammation of the skin!

He offered to take me into hospital and hydrate me, and pump me full of steroids. I declined.

When I woke the next morning I felt something had shifted and I knew I was going to get better.

And now I am here in Stockholm, nearly two weeks later. I am definitely on the mend, but it is slow. The rash has eased and is not so angry. The leg wounds are still nasty. And I still itch. But I am better.

Two days ago I went to a Chinese Doctor. I have a lot of experience of Chinese medicine and it really works, so I have great faith in it. He diagnosed I have heat and wind in the blood, he doesn’t know or care why. his job is to clear it. So I have bags of herbs to cook up twice a day (thats the usual Chinese protocol) and need to lay off heat producing foods like seafood and cauliflower.

I am hopeful. I still think, when this is cleared, that I need to address my whole system and get thoroughly tested, when we get to the US. I want to get a complete and convincing thyroid panel done, the test in UK by conventional medicine is sketchy and not reliable. I want mineral and vitamin test. I want to find out if there is mercury in my system. lets wait and see.

So before I show you a gallery of all the pictures I want to talk about the emotional and psychological impact and demands of this long and strange experience.

It has challenged me, mainly because of its unknown cause. But I had to decide at some point to accept its mystery and focus on health, feed myself good vibrations, and stay focused on the healing. But one can’t pretend either. So its a knife edge. It is a mystery, and it challenges us because its a mystery. Humans work on wanting to know why. I know I do. It drives me mad not to know. But I refuse to crumble under not knowing.

And here is one of the important points. I did not yield to the easiest course of action, which was steroids. I did do the antibiotics, and I did do a course of antihistamines but I felt that was as far down the rabbit hole of medication as I was prepared to go. I always prefer the natural route. And even though many many people advised me to go to emergency, doctors etc, they actually have done no good whatsoever. The best info has come from Ayurveda and Chinese Medicine. And the best treatments.

I’m sorry if this has been a long blog but I needed to get it off my chest.

Happy healing to you all. 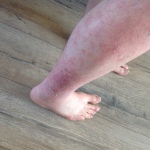 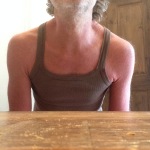 4 thoughts on “What a month its been! The never ending mystery full body rash.”