Have you used Google search to look up your symptoms?
Have you speculated about what you are suffering from and found Google useful?
Have you looked up health tips?
Foods to eat?
Exercise regimes and tips?

If you answered yes to any or most of these questions you are in good company!
Because the truth is that, even though Google searching is fraught with the potential for wrong information and misdiagnosis, the benefits, at least to this writer and researcher, far outweigh the drawbacks.

Imagine a world without a decent search engine. Imagine it being taken away from us at this point where we have got so used to it. It’s nigh on impossible to imagine. Google is intertwined with our existence, for good and bad, and usually both, and like most of these things, we either make it work for us or it may well work against, or leave us behind.

Make no mistake, it’s almost a certainty that the doctor you go and see in real life, who you depend on for precision diagnosis and ‘absolute authority,’ uses Google. Some don’t, most do. I have witnessed this with my own eyes twice, and at first it shocked me and even made me laugh, but since the second time I remember actually thinking, ‘Why Not?’
What is wrong with my doctor using this extensive resource?

I think we have old paradigm beliefs about the sacrosanct role of the doctor. Somehow we have elevated doctor to the level of wise man, sage, ultimate authority and ‘god.’ Well maybe god is a bit much but you get my point! We expect the doctor to be the font of all knowledge and never have to refer to books or Google. Surely they are supposed to know all? 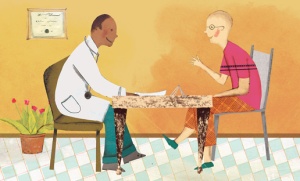 MEDICAL SYSTEM IS THE NEW CHURCH.

But this is quite obviously an illusion and I believe we should cut these doctors some slack and realise they are just the arbiters and representatives of a system called the medical system. While we uphold the medical system as the only system, the ultimate body church we all pray at, and the only answer to this vast issue of illness, we are going to be trapped in the need to elevate the doctor onto a pedestal. And we all know what happens when one is on a pedestal, the only way is down.

What I am saying is lets realise the doctor is fallible, human, and in the dark about many things. I have been let down, disappointed and frustrated as many times as relieved, by my doctor. So much of the time they simply don’t have answers and go through the ‘referring you to a specialist’ stuff. They don’t know about food and diets, they don’t know about how interconnected the mind and emotions are with health, they don’t know about herbs and traditional remedies and, in the UK, only spend 10 short minutes with you anyway.

10 minutes is not enough time to get to grips wth your health or illness. Period.

Unfortunately the doctor is also caught in the elevation of their starring role in your health. many of them are caught up in their own power I am afraid to say. And then if you go to see them and happen to say ‘I have been researching my symptoms on Google and have some ideas,’ you may well get the ‘eye roll’ as I call it. Or they could be downright hostile to you.

DO NOT LET THAT PUT YOU OFF.

Recently I have had a relatively new doctor I have seen for this unbelievable rash I couldn’t get to grips with. I talked to this doctor honestly and openly about preferring natural healing, wanting to take responsibility, and what I have been exploring on Google. I was totally non confrontational and actually asked for his help. Luckily he was open to my ideas and we explored them. Some of them he said ‘Absolutely no way it could be that,’ and other ideas he said, ‘Let’s test and see,’ and so we did.

He reflected my need to be directly involved in my own health investigation. He could see how important it was for me to know what was causing this issue. I didn’t just want medication, in fact I didn’t want meds at all, but I wanted to know.

And he responded to this warmly and encouragingly. That is how change will happen.

Sometimes I think we want the system to change from the outside first, we want the doctors and the medical system to wake up and transform itself. But it has been proved time and time again that systems only change when there is a movement that forces them to change.

Which brings me back to Google. Now I am not suggesting Google is the answer to the problems facing us in illness and health. Google itself will not spark the revolution in health we so badly need.

BUT. Google is empowerment of the patient. Google is information. It is such a valuable resource it has to be included in your toolbox of resources. And the more you use it, diligently and intelligently, the better it gets and the more it reveals.

A couple of tips for using Google:
Take the emotionality out of it. Don’t let it inflame your fear. It can and it will feed fear if you let it. If you are afraid and fearful, don’t use it. Computers and internet tend to amplify our mental and emotional states, believe me I know this for myself. So be warned, and if in doubt do not use!!
Be open to what arrives through Google, and try different phrases and words, scroll down and find alternative sites not just the top ones, particularly the sponsored ones, and use it as an exploration of possibilities, until you get more experienced.
Ask a loved one to help and do it together. It sounds like weird fun but actually it engages you both in a kind of detective mission.

THE EMPOWERED AND INFORMED PATIENT OF THE FUTURE.

Consider this. You are, in the long term, changing your relationship to this holy ‘doctor’ idea. In the longterm it is you who are going to be at the centre of your health and wellbeing. With radical new testing gadgets and apps coming on line and usable at home, and with so many alternative possibilities available for healing illness, the future is all about change. And that makes the doctor a vital part of your health team, but only a part, not the whole thing.

And Google, or other search engines if you prefer, is going to be a very useful and necessary part of your research and responsibility.

But you are going to be at the centre of it. It is a vital part of the change. When we say, and this quote is so often used, ‘Be the change you want to see in the world,’ we need to include our personal care responsibility with every other thing we do. An informed and insightful, a wise and intelligent patient is one who will take preventative action as well as remedial.

There is a revolution taking place this century, and informed and engaged patients are at the centre of it. It is very exciting.

If you don’t believe me, check out this article recently published.
The Blockbuster Drug of the Century – An Engaged Patient.

Thanks for reading, happy searching!

One thought on “Is Google a Health Resource or a Rabbit Hole of Fear?”